Start a Wiki
Cream the Rabbit (クリーム・ザ・ラビット Kurīmu za Rabitto?) is a fictional, anthropomorphic rabbit from the Sonic the Hedgehog series. She has a bond with a Chao named Cheese, who follows her everywhere, and though she is the youngest female character, being six years old, she is not afraid to stand up for herself. She is a bit naive at times. Just as Tails is the sidekick of Sonic, Cream serves the same purpose for Amy Rose.

Cream is a princess-like figure; she is polite, just, follows manners (and never forgets them) and does what she is told. Her mother's strict, but kind discipline has made Cream very polite. She's very friendly and tries to be close to everyone she meets. She is brave as well, usually not afraid to go out on an adventure. She’s a bit naive however, and doesn’t always see things right away, since she’s still very young. She is very honest, and does not lie. It is mainly from being polite and good-natured.

Cream enjoys spending most of her time outdoors. There, she likes to play with her friends, usually any activity they want, or collect flowers which she finds pretty and joyful. She loves adventures and exploring. Indoors, she enjoys watching TV and drawing pictures. Her favorite food is ice cream.

She doesn't like any form of violence, abuse or fighting and only fights to protect the people she cares about. Like most of the characters in the Sonic series, she doesn't like Doctor Eggman much either, but as custom, she is still somewhat polite to the doctor (at least before using Cheese to smack him senseless). Although she doesn't like physical, verbal, or emotional violence she will fight to help her friends.

Cream's trademark skill is her ability to achieve flight by flapping her two rather large ears as wings, allowing her to lift herself off the ground and move freely through midair. Although she cannot fly as high, as fast or for as long as Rouge, Marsha or Tails can, she can fly a greater horizontal distance. Despite her clear limitations, however, Cream can still move moderately fast while flying as seen in Sonic Generations, and is also able to carry weights much greater than that of her own while flying, without hindering her own flying speed, as seen in Sonic Heroes, hinting a great deal of strength behind her flying.

Like other characters in the Sonic the Hedgehog series, Cream is able to run at super speeds. However, she is not as fast as Sonic, Shadow, Marsha or even Amy.

While not having highly professional skills on the field, Cream is also very acrobatic and agile, being able to perform simple, yet impressive movements and tricks while airborne, and grind on rails with ease.

Because of her young age and her firm stance against violence, Cream has very little combat experience. She severly lacks in physical prowess, battle cunning and often has to rely on Cheese and her friends' help in direct combat. Despite this, Cream possesses some fighting skills, having been taught them to better help her friends.

If motivated or pushed to do so, however, Cream can fight exceptionally better than she usually does, being able to defeat some of Eggman's stronger creations, such as the doctor's combat mechs and the weaponized Chaos Gamma.

When forced to fight others, Cream almost never attacks an opponent physically herself, virtually trying to avoid any form for physical contact. Instead, Cream fights by working in collaboration with Cheese, commanding the Chao to attack the opponent for her in various ways, such ramming directly into the enemy at high speed, dealing direct and crippling blows, blocking or protecting her from physical harm, or even stir up tornados to blow opponents away, while she keeps safe distance from the opponent.

When not fighting opponents herself, Cream focuses on providing support to her allies, such as in Sonic Chronicles: The Dark Brotherhood where her POW moves are all cheers that can empower and encourage her allies.

Besides the Chao Attack, Cream is also able to perform the Spin Attack, where she curls into a ball while in locomotion to smash through enemies and obstacles, and the various forms if it. Using the Spin Jump, Cream can leap into the air and curl into a spinning ball to deal damage to anything she lands on, the Spin Dash lets her shoot herself forward as an acceleration roll at high speeds to break barriers or mow down enemies, and the Homing Attack allows Cream to jump and home in on an enemy to attack.

Cream has good homemaking skills, such as cooking and decorating, most likely because of her mother's teachings.

Cream in her Sonic Riders outfit 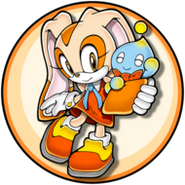 Sonic Channel
Add a photo to this gallery
Retrieved from "https://sonicthehedgehogfanon.fandom.com/wiki/Cream_the_Rabbit?oldid=8801"
Community content is available under CC-BY-SA unless otherwise noted.